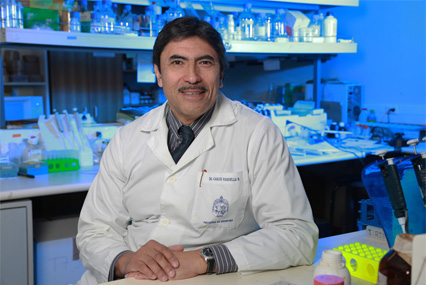 His research experience began in 1990 with the Fogarty International Fellowship where he obtained the degree of Ph.D. in molecular biology, in California USA. He also received the President Honor Scholarship from the Ministry of Development and Planning, Santiago, Chile. During his training period he received 2 awards: Henry Christian Memorial Award for Excellence in Research, supported by the American Federation for Clinical research (AFCR), Washington, USA and Trainee Investigator Award supported by the Association of American Physicians (AAP) , American Society for Clinical Investigation (ASCI) and the American Federation for Clinical Research (AFCR), Washington DC, USA.

On his return to Chile in 1994, he developed his research entirely in Chile with a financial support obtained by 9 consecutive FONDECYT grants and 2 FONDEF grants as principal investigator. Moreover, he is a member of the Millennium Institute on Immunology and Immunotherapy and recently Consorcio BRMC-Corfo. The development of these projects has resulted in over 100 ISI publications and highlighting that over 90% of these he was the main author or correspondence author. These achievements have been recognized with more than 50 awards in national and international conferences. He has also been a director of various Doctoral Theses and a Mentor of graduate students.

It is important to mention that he has received the award for best paper published in Chile in 2 opportunities (awarded by the Medical Society 1994 and 2001), the Award for Excellence in Research (awarded by the Catholic University in 1997 and 2012), the Academy of Medicine Award on 2 occasions (awarded by the Medical Society 2002 and 2007). He has also served on the Editorial Board of several International Journals. In 2008 he was nominated as a world expert on the subject of mineralocorticoid hypertension, where he and a group of 8 experts, appointed by the Endocrine Society, developed guidelines for the diagnosis and treatment of primary aldosteronism. This achievement represents the highest international recognition received by Dr. Fardella and acknowledges his experience and creative input in this area, developed entirely in Chile.