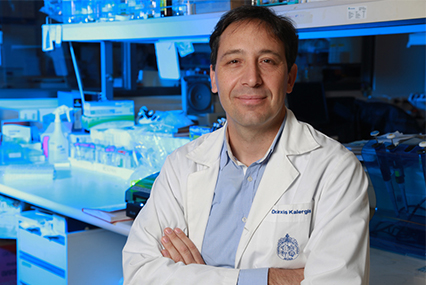 Dr. ALEXIS M. KALERGIS
Director of the Millennium Institute on Immunology and Immunotherapy

Dr. ALEXIS M. KALERGIS is a Biochemist from thePontificia Universidad Católica de Chile and a Ph.D. in Microbiology and Immunology from the Albert Einstein College of Medicine in New York-USA. After his PhD, he performed ​​two post-doctorates, one at the Albert Einstein and another at The Rockefeller University, New York, USA.

He is currently Full Professor in the Department of Molecular Genetics and Microbiology, Faculty of Biological Sciences, Pontificia Universidad Católica de Chile, and Professor at the Faculty of Medicine at the same university. Dr. Kalergis is a renowned researcher, he has won the prize for the best doctoral thesis at the Albert Einstein College of Medicine, has given numerous international conferences and has published more than fifty articles in leading journal in the field. He has also been awarded and funded by several prestigious institutions in the USA, as the Helen Hay Whitney Foundation, the Irvington Foundation, the Irene Diamond Foundation and TWAS. In 2004, shortly after his return to Chile, the Society of Biology and BiosChile-IGSA gave him the award to the most outstanding young researcher. In 2005, El Mercurio and the Universidad Adolfo Ibáñez, chose him as one of the 50 young leaders of Chile.

Dr. Kalergis has been awarded and directed research programs and projects from Fondecyt, Fondef, International Foundation For Science, Technology Consortia, Millennium Scientific Initiative and has also participated as an independent researcher in interdisciplinary projects of the European Community and Fondap. He is also director of the Millennium Institute on Immunology and Immunotherapy, which is supported by the Millennium Science Initiative. His research focuses on the molecular level in the immune response against infectious agents and tumors, as well as re-establishing immune balance in autoimmune disorders.

He has published numerous articles in high impact journals and has contributed to the scientific training of dozens of undergraduate and postgraduate researchers in the field of immunology. His laboratory has recently succeeded in generating a vaccine against the respiratory syncytial virus, which is currently being prepared for being applied into humans. If this vaccine works, it could solve one of the major public health problems currently affecting the country.