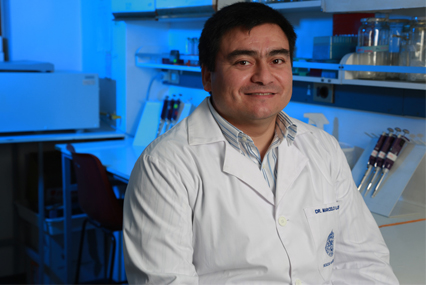 Marcelo López-Lastra studied Biochemistry at the Universidad Austral de Chile, graduating in the year 1994. He performed ​​his undergraduate thesis under the supervision of Drs. Sandino Ana Maria and Eugenio Spencer at INTA, University of Chile. In 1995 he became a regular student to the PhD program in Biology Microbiology mention. In 1996 he was admitted to the Ph.D. program in Clinical Research of the Université Claude Bernard Lyon I, Lyon, France. In 1999 he obtained his Ph.D. at the Université Claude Bernard Lyon I and the University of Chile. Dr. López-Lastra performed two independent projects, both mechanisms focalized on initiation of protein synthesis in retroviral mRNA, one under the supervision of Drs. Eugenio Spencer and Jean-Luc Darlix (Chile) and another under the supervision of Dr. Jean-Luc Darlix (France). After completing his thesis Dr. López-Lastra continued working with Dr. Darlix Ecole Normale Superieur in Lyon as Postdoctoral Fellow student ANRS (Agence Nationale de Recherches sur le Sida) through the end of 2000 In 2001 initiated new studies as Postdoctoral fellow CIHR (Canadian Institutes of Health Research) under the supervision of Dr. Nahum Sonenberg, Department of Biochemistry, School of Medicine, McGill University. In 2004 Dr. López-Lastra returns to Chile and sets Molecular Virology Laboratory at the School of Medicine, Pontificia Universidad Católica de Chile. The studies of Dr. Lopez-Lastra focus on the understanding of the relationship between virus and host RNA with special emphasis on studying the mechanism of initiation of protein synthesis in viral mRNAs.