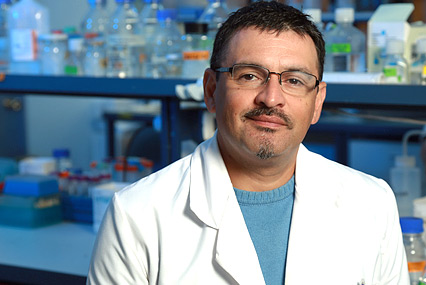 Dr. Flavio Salazar-Onfray is a scientist who earned his Ph.D. at the Karolinska Institute in Sweden in 1998. He returned to Chile in 1999 after earning a spot in the Disciplinary Program of Immunology, Institute of Biomedical Sciences where he successfully established a translational research group. The main interest of Dr. Salazar has focused on various aspects of tumor immunology, from basic research to clinical trials. Dr. Salazar described the effect of a cytokine IL-10 in inhibiting tumor antigen presentation and how this cytokine could be utilized by tumors to evade the immune system (various articles in J. Exp .. Med. 1994 J. Immunol. 1997-1998). It has also identified and characterized new melanoma antigens derived melanocortin 1 receptor, which proved to be over-expressed in primary and metastatic melanoma British J Immunol. (2005). Over the past ten years, Dr. Salazar has organized and leads a multidisciplinary group of scientists including physicians specializing in oncology and immunology, along with biologists and biochemists. The first GMP facilities for handling human cells were built and the first clinical trials Phase I and Phase I / II study was conducted in Chile based on dendritic cells for the treatment of melanoma and prostate cancer immunotherapy. The results of these trials have been published in international journals of high impact and Clin. Exp. Immunol. (2005), J. Clin. Oncol. (2008) Clin. Cancer Res. (2011) Cancer Immunol. Immunother. (2012). He and his group invented an original method for producing dendritic cells ex vivo. This new method is protected by an international patent (PCT / EP2008 / 062909). Group also described the interaction between the human immune cells and tumors mediated by gap junctions (GJ) (J. Immunol. 2007, J. Immunol. 2011). Dr. Salazar has been supervising several undergraduate and is very committed to the training of young immunologists. It has contributed directly to the formation of 5 Phd, and several MSc. Since 2005, Dr. Salazar (Assistant Director), along with Dr. Kalergis (Director) participated in the Millennium Institute on Immunology and Immunotherapy. He has been a referee in magazines such as, Cancer Res., J. Immunol., Immunobiology and several basic and clinical Latin American journals, and has also been a member of the study groups CONICYT, the Chilean equivalent of the NIH. Dr. Salazar has been a guest speaker at several international and national conferences, including FOCIS, Australia Cancer Society, cancer of European society and the American Association for Cancer Research. Dr. Salazar was trained in several research centers such as the prestigious Karolinska Institute in Sweden and the US NIH and has a network of collaborators in Sweden, Germany, UK, Denmark, France, USA and Australia. Dr. Salazar has participated in several scientific societies and is past president of the Chilean Society of Immunology and former President of the American Association of Immunological Societies (ALAI). During the past six years, won several research grants from national and international organizations (Cancerfonden Sweden, the University of Chile, Chile FONDECYT, Chile Fondef, CORFO and the Millennium) and has become the leader of several R + D. Was the founder of two spin-offs, Oncobiomed in 2002, dedicated to the transfer of technology and Bionex cellular immunotherapy in 2007, dedicated to basic scientific advice for the design and drafting applications to fund R & D. During 2007 and 2008, he was nominated for the innovation Award by the Forum Avonni innovation Economy Ministry and the private sector. In 2009 he was part of the delegation of Chilean president during the state visit to India.