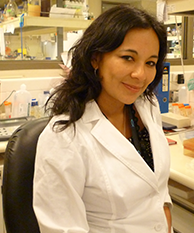 Dr. Margarita K. Lay obtained her Bachelor degree in Biological Sciences at the P. Universidad Católica de Chile. Then, she worked in the Virology Unit of the University of Chile, participating in epidemiological studies of respiratory viruses and in a Phase I clinical trial for an influenza vaccine. Afterwards, she traveled to the USA and worked in the laboratory of Dr. Roy Curtiss III at the Washington University in St. Louis, USA, participating in a Phase I clinical trial to test a candidate vaccine against Salmonella Typhi and in developing other candidate vaccines against pathogenic bacteria. Subsequently, she participated in the discovery and characterization of the murine norovirus, in the laboratory of Dr. Herbert W. Virgin IV of the same university. The finding of this virus was published in the prestigious journal Science. In parallel, Dr. Lay earned her Master degree in Biology at the Washington University in St. Louis. Later, she obtained her Ph.D degree in Molecular Virology and Microbiology, doing her thesis in the laboratory of Dr. Mary Estes at the Baylor College of Medicine, Houston, which consisted of developing a possible cell culture system for the replication of Norwalk virus, the prototype human norovirus, as well as, the study of the innate response to this virus. Later, Dr. Lay returned to Chile in the year 2011 and did her Postdoctoral fellowship in the laboratory of Dr. Alexis Kalergis at the P. Universidad Católica de Chile, studying the immune response to respiratory viruses, which led her to obtain numerous publications and international awards, such as the Young Investigator Award given by the Bill and Melinda Gates Foundation. In addition, she also participated in bringing the candidate vaccine for Respiratory Syncytial Virus (RSV), developed in Dr. Kalergis´s lab, to be considered one of the seven best products of Innovation in Chile, according to CORFO and the Stanford Research Institute International. She has also participated as Co-Director of a Linking Science and Business project to have a Vaccine Manufacturing Center in Chile.

Currently, Dr. Lay is an Assistant Professor of the Biotechnology Department of the Faculty of Marine Sciences and Biological Resources at the Universidad de Antofagasta. As an academic, she has also participated as a member of the Norovirus Specialist Group of the Chilean Agency for Food Safety and Quality (ACHIPIA) of the Chilean Ministry of Agriculture.

Human noroviruses are the cause of more than 95% of epidemic nonbacterial gastroenteritis worldwide, with some lethal cases. Moreover, several infections and outbreaks, caused by human norovirus, have been reported in Chile. In addition, it is: the most common cause of diarrhea in adults; the second most common cause in children; and the main cause of severe gastroenteritis in children less than 5 years old worldwide after rotaviruses. Nowadays, neither commercial vaccine nor therapeutic tools are available to prevent human norovirus infections. This is due, because just until recently, there was neither an efficient in vitro cell culture system nor a small animal model for its study.

Investigations of Dr. Lay, related to human noroviruses, include:

On the other hand, RSV and human Metapneumovirus (hMPV) are the most important viral agents that cause diseases in the lower respiratory tract, mainly affecting infants, children and the elderly. There are also no vaccines and only limited therapeutic tools for these viruses. Moreover, the mechanisms by which these viruses infect the air epithelium and obstruct the airways remain to be fully elucidated.

Investigations of Dr. Lay, related to respiratory viruses, include: