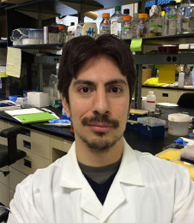 Dr. Leandro Carreño did his undergraduate and PhD at the Pontifical Catholic University of Chile (PUC), earning the title of Biochemistry 2006 and his Ph.D. in Biological Sciences with a major in Molecular Genetics and Microbiology 2010. His undergraduate and PhD thesis were performed in the laboratory of Dr. Alexis Kalergis at School of Biological Sciences, PUC. His undergraduate thesis was awarded as the Best Thesis in the 2006 Meeting of the Chilean Society of Cell Biology. In 2010, Dr. Carreño was awarded with the Hermann Niemeyer Medal, awarded to the best graduate student, by the Chilean Society of Biochemistry. His research has been supported by CONICYT and Millennium Nucleus of Immunology and Immunotherapy (now Millennium Institute). As a result of their studies important new insights were found, related to the to molecular mechanisms used by T cells to control the immune response, as well as important studies on the role of dendritic cells in the pathogenesis of the Lupus disease. The studies performed during his doctoral thesis have contributed to the generation of more than 20 scientific papers in very prestigious international journals.

Currently, Dr. Carreño is Assistant Professor at the Immunology Program at the Instituto de Ciencias Biomédicas at the Faculty of Medicine at the Universidad de Chile and is an Associate Investigator at the Millennium Institute on Immunology and Immunotherapy. His research is focused on the relationship between cells of the innate and adaptive system in inflammatory and allergic diseases. In 2012 he was appointed as one of 10 Pew Latin American Fellows in Biomedical Sciences, being the only Chilean named that year. In 2012, Dr. Carreño was selected as one of 100 young leaders by the Revista Sabado of the Chilean newspaper El Mercurio.